Let's Start At The Beginning

I have not posted in quite some time. I don’t plan on publishing a barrage of posts any time soon either but I am going to begin to be a more frequent poster. So, you are safe if you sign up for my email list.  I will only send out when I publish a new post which most likely will be not on a set schedule but still occasionally, maybe once a month or every two months.  Something like that.

I really enjoy writing this blog because it helps me to collect my thoughts about Anthropology and organize them. I don’t post often because I like to think a lot about what I am going to say in a post and also, I am slow mover. 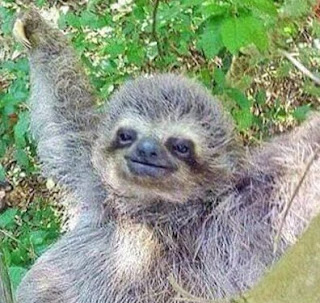 I haven’t posted lately as I stated but I have been thinking a lot about the type of blog I want going forward.  I believe it will serve readers better, when talking about the study of man, if I start at the beginning.  By that I mean at the time of the last common ancestor between hominins and chimpanzees.

So much has changed in the field of Paleoanthropology since I graduated from college.  It’s been a joy to see all the new discoveries and advances in the understanding of our human legacy. Some might think that the study of ancient fossils is pretty much set in stone (no pun intended).  Nothing could be further from the truth.  Paleoanthropology is a very dynamic and ever changing field.

Especially in last few years, there have been major new discoveries and insights every month.  New species of hominins are unearthed and old fossil remains are being reevaluated to provide us with an amazing amount of new information that is literally rewriting the entire field of human evolution.

As much as the whole discipline of Paleoanthropology fascinates me, I am even more intrigued by the concurrent evolution of human consciousness. It is something I think about on a daily basis. I have a lot to say about the development of consciousness and plan to explore that area fully, starting with the first thoughts man had of supernatural entities clear through to modern religious philosophies and beyond.

But first things first.  Long before our ancestors developed a level of consciousness that approaches what we enjoy today, we began to physically evolve into the present morphology of our bodies.  The story of which is about as fascinating a story that could ever be told.

The starting point for the first exclusive ancestor to modern man and human evolution starts with the split from the last common ancestor to both humans and chimpanzees.  When the ancestral line split, the chimpanzees and humans went their separate ways, this is the point we start at.

As you can imagine that was a long time ago, fossil evidence is sparse at best and the estimates for the exact time of the split varies wildly.  Some say it could be 13-14 million years ago and others say more like 7-8 million years ago. Currently the 7-8 million years ago timeline is the more supported view and unless or until new fossil discoveries are made it will probably stay that way. The acronym for it is, CHLCA or chimpanzee-human last common ancestor.

At this point we are only concerned with human evolution so if you are in the sub-tribe Homininia you are called a hominin.  All of the species belonging in the human legacy are hominins, including modern man.  Below the sub-tribe classification, you have Genus and Species, even sub-species in some cases to designate an individual species.

The full taxonomic classification for modern man is explained in this previous post here.

Species are named by their genus classification first and then the species name. The genus is always capitalized and the species is not.  This is called binomial nomenclature, hence for modern humans we have genus – Homo, species – sapiens or Homo sapiens.

The first hominin we currently know of after CHLCA is called Graecopithecus freybergi.  The first fossil for this species, a mandible, was found in 1944 but not extensively studied until 2017.  G. freybergi could very well be the first hominin even though the fossil evidence is based on only two finds.  However, after extensive state of the art dating and analysis it seems reasonable at this point they could be included as hominins.

Here are the fossils found from two different locations, a lower jaw from Greece and an upper premolar from Bulgaria. 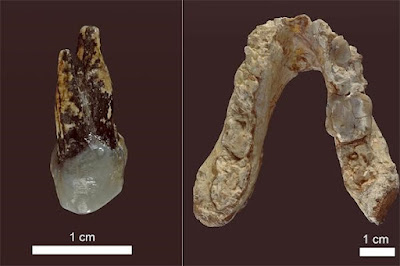 Previous to Graecopithecus freybergi, pre-humans were only known from sub-Saharan, Africa.  The discovery of G. freybergi in Southern Europe upended a long-held belief that human beginnings belonged to Africa. With the timeline for the Graecopithecus freybergi fossils being 7.24 and 7.175 million years ago it also set the CHLCA back hundreds of thousands of years.

In the time period we are talking about, 7.2 million years ago, large portions of Europe were open savannas.  This was pivotal in helping the evolution of G. freybergi. The open grasslands of the savannas promoted upright walking and other evolutionary changes.

You might look at the photo above and think, “Wait a minute.  Is that all they have to go on?  How can anyone determine anything with so little fossil evidence?”  Well scientists can determine quite a bit with a small sample size especially if that sample size is from the jaws and teeth. Using teeth and mandibles is one of the best ways to classify hominins.  From lengthy and detailed comparisons of these fossil remains and other hominin fossils quite a bit can be deduced.

There will probably be more fossil remains of this species unearthed in the future.  For now, G. ferybergi has already expanded the vision of human evolution to include the possibility that the first hominins evolved in Europe and not Africa.

Right on the hells of Graecopithecus ferybergi is Sahelanthropus tchadensis discovered in 2001.  This species is dated to 7 million years ago and again it is represented by just a few bone fragments consisting of nine cranial specimens.  Even with this sparse fossil evidence we can see human like qualities such as small canines and some facial features.  But the most telling feature is the position of the foramen magnum.  The foramen magnum is the hole at the base of the skull.  It is positioned far enough forward to indicate bipedalism.  Being bipedal is a significant milestone along the path to being human. This species is thought to be ancestor to Ororrin tugenensis.

The next pictures are of a reconstructed Sahelanthropus tchadensis skull. 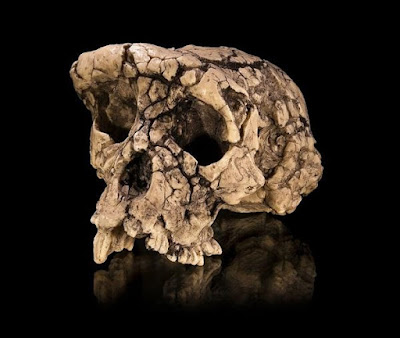 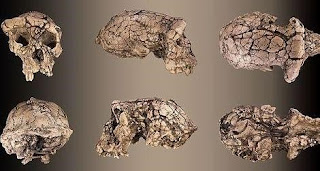 Orrorin tugenensis first discovered in 2000 it has been dated to 6 million years ago.  It is represented by 20 specimens of fossil remains from five individuals at four different sites in the Tugen Hills in Kenya.

The analysis of the remains indicates bipedalism and tool use of the hands.

The next photo is of the skull fragments found. 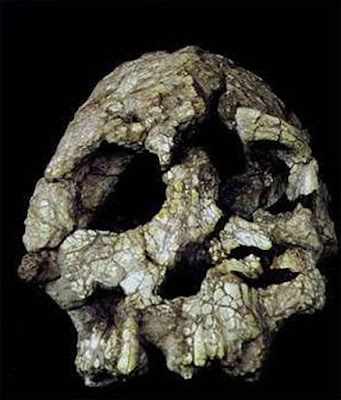 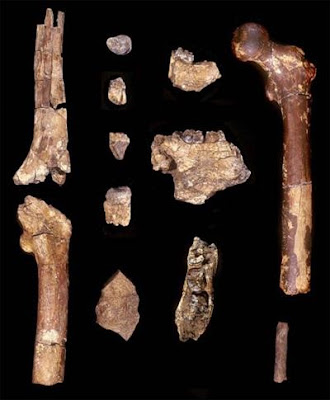 These five species in this post all are represented by just a handful of bone fragments that have been discovered for each individual species.

I think Orrorin tugenensis is a great example of the challenges for studying such a small sample of fossils. There a few various conclusions that have been postulated from the fossil evidence. It ranges from Orrorin tugenensis being a direct ancestor of humans to speculation that the species lived before the ape and human split and could be an ancestor to both human and chimp lines.  Some think it could be such a direct link in the human legacy that it would move the Australopiths to a side branch of the hominin family line.

In other words, it’s all over the place.  Until Paleoanthropologists have unearthed more complete examples of each species the interruption of what we have will vary.  One thing is clear however and that is they are all part of the story no matter how they each fit in.

Ardipithecus kadabba discoveries occurred between in 1997 and 2002 and is dated between 5.7 to 5.5 million years ago. Thought to be the direct ancestor to Ardipithecus ramidus.

Here is the fossil evidence discovered so far.

Analysis of the bones do indicate the creature could have been bipedal but more discoveries would be welcomed here.

Ardipithecus ramidus first discovered in 1994 and is dated to 4.4 to 4.2 million years ago.  There are 110 bone specimens from 35 individuals for A. ramidus. This creature is thought to be bipedal and a possible ancestor to the Australopiths.

Here is a picture of the skull bone fragments that have been found. 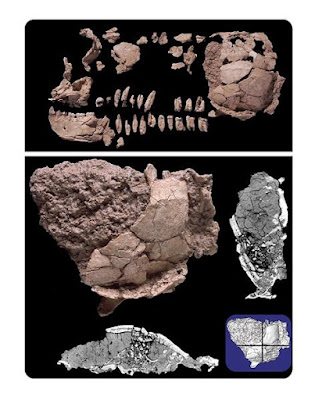 From all the bone fragments in the photo above here is a reconstructed skull simulation. 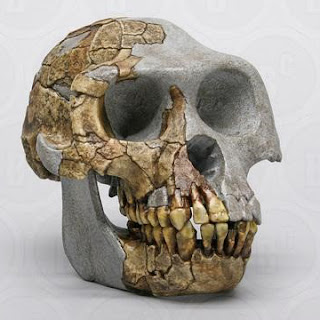 The Time Gap and the CHLCA

The five species I just talked about are possible candidates to be included but each of them have their own issues.  A list of pros and cons for each one leaves the question open.

Were any fully bipedal?  Partially bipedal?  The evidence seems to indicate that all of them had the capability.  That is one reason they have been considered to be hominin in the first place.  Bipedalism being a major milestone.

If none of these five species are in a descendant line to modern man then the gap still exists.  They could be transition species or when more discoveries are found each one could be considered a hominin.

With so little evidence to work with it’s amazing the information derived can be so extensive.  But the analytical techniques used are quite considerable.  The comparative analysis between older species and younger ones is invaluable when looking at attributes such as bipedalism.  The comparisons of individual bone structure sheds light on methods of locomotion and even the ability for tool use.

As you can see by the time assigned to the discoveries, most were in the past 20 years or earlier ones re-examined in the last ten years.  Newer techniques for exploration are being tested out and perhaps someday a high-tech ground sonar will enable Paleoanthropologists to find fossils they might have not been able to.  Until then the time between the Chimpanzee Human Last Common Ancestor (CHLCA) and the first Australopiths has the above-mentioned species as viable candidates to fill in that gap.

We pretty much know the hominin legacy started about 7 to 8 millions years ago.  The five early species we just talked about are likely candidates to fill the gap between the CHLCA and the start of the Australopiths.

With such scant fossil evidence available it is certainly possible that the next few years we might see more collaborating fossils from these species or an entirely new set of fossils might be unearthed making the picture clearer or just as likely making it more muddy.

You might be thinking, ‘Hey wait a minute, this is science and isn’t science supposed to be pretty accurate? Why don’t they just DNA the whole lot and find out?’  Because of the chemical degradation of DNA over time this is not an option at present. However, new advances in dating and identification are in the works. Scientists are currently working on the analysis of ancient proteins with mass spectrometry, an approach commonly known as palaeoproteomics, which will allow them to overcome the limits of DNA degradation.  Stay tuned.

Regardless of how the first chapter of hominin evolution plays out, the next chapter in evolution of hominins are the Australopiths and here the story gets clearer. 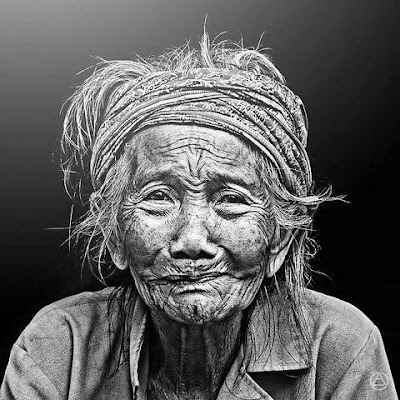 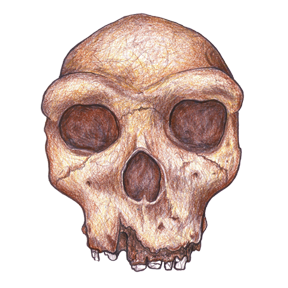 I have been fortunate to have made a living as an artist for the past four decades. Please visit my Etsy shop - Spiritual Gifts for All to see the Sacred Symbols and Talismans I create.